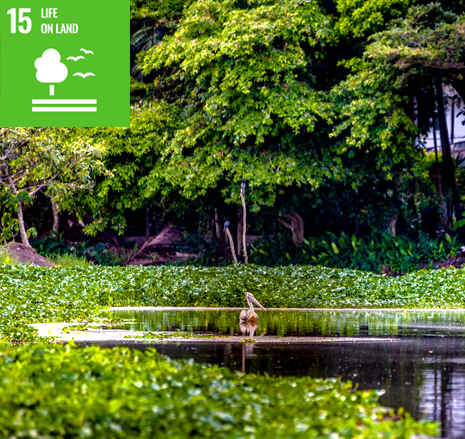 Sri Lanka is identified as one of the world's 35 biodiversity hot spots, with a high level of endemic species observed in most taxonomic groups. The country also has a forest area of around 29.7% of its total land mass as at 2016. However, deforestation is identified as a major cause of Sri Lanka's loss of biodiversity, owing to the growth of the export plantation economy in the wet zone, colonial commercial timber policies, irrigation development and agricultural expansion. In addition, invasive alien species pose a threat to biodiversity, and intense conflicts between humans and wildlife have emerged in many areas, particularly with elephants.

15.1 By 2020, ensure the conservation, restoration and sustainable use of terrestrial and inland freshwater ecosystems and their services, in particular forests, wetlands, mountains and drylands, in line with obligations under international agreements
15.1.1 Forest area as a proportion of total land area

15.1.2 Proportion of important sites for terrestrial and freshwater biodiversity that are covered by protected areas, by ecosystem type

15.2 By 2020, promote the implementation of sustainable management of all types of forests, halt deforestation, restore degraded forests and substantially increase afforestation and reforestation globally
15.2.1 Progress towards sustainable forest management

15.3 By 2030, combat desertification, restore degraded land and soil, including land affected by desertification, drought and floods, and strive to achieve a land degradation-neutral world
15.3.1 Proportion of land that is degraded over total land area
NO CHART DATA
15.4 By 2030, ensure the conservation of mountain ecosystems, including their biodiversity, in order to enhance their capacity to provide benefits that are essential for sustainable development
15.4.1 Coverage by protected areas of important sites for mountain biodiversity
NO CHART DATA
15.4.2 Mountain Green Cover Index
NO CHART DATA
15.5 Take urgent and significant action to reduce the degradation of natural habitats, halt the loss of biodiversity and, by 2020, protect and prevent the extinction of threatened species
15.5.1 Red List Index
NO CHART DATA
15.6 Promote fair and equitable sharing of the benefits arising from the utilization of genetic resources and promote appropriate access to such resources, as internationally agreed
15.6.1 Number of countries that have adopted legislative, administrative and policy frameworks to ensure fair and equitable sharing of benefits
NO CHART DATA
15.7 Take urgent action to end poaching and trafficking of protected species of flora and fauna and address both demand and supply of illegal wildlife products
15.7.1 Proportion of traded wildlife that was poached or illicitly trafficked